WE HAVE TWO LEADERS BOTH GREAT MATES! 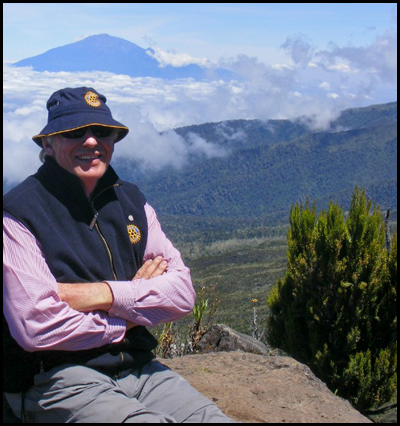 On the slopes of Mount Kilimanjaro:

The Straw Wolf contemplates the Kilimanjaro ascent to raise funds for the children of Africa.

{You can see Mount Meru in the background.}

The Straw Wolf aka John Glassford, is a straw bale house builder living in a remote rural Australian town Ganmain NSW. John was born and raised in Kenya, East Africa, until about the age of 21 when he left for Scotland and and went to Edinburgh University. John and his young family migrated to Australia in 1968. John and his wife Susan are now finally settled in the West of New South Wales, Australia and has dedicated the rest of his life to rescuing the AIDS orphans of Africa. Especially those from his home town of Nairobi in Kenya and to provide them with shelter, food, education and clean water. All the things that Rotary International does so well as a team of well organised dedicated women and men the world over.

John has been instrumental in raising awareness of the situation of the orphans of Africa due to one or both of their parents dying from HIV/AIDS. There are now around 20 million orphans as a result of this pandemic with no end insight. UNAIDS estimates that there will be 25 million orphans in Africa by the end of 2015. Some non government agencies/bodies involved in the AIDS pandemic believe that the figure will be much higher than 25 million throughout the African continent.

It was Stephen Lewis the former UN Special Envoy to Africa for HIV/AIDS through his video Race Against Time that first alerted John to the situation in Africa. John and Susan have now been back “home” to Africa with 5 visits in the past 6 years and with many more to come.

John has a string of successful international fund raising projects under his belt that he has seen from conception to finish, with the Kili 28/8 project which raised in excess of $78,000 for the children of Africa. There is much more to be done and the Orphan Rescue Kits will be just one of the many projects you can support.

To date we have raised around $250,000 for Africa including the Mountains of the Moon Climb 2011, the Mount Kilimanjaro Climb 2007, one major raffle in 2005 and the work done by Past District Governor Fred Loneragan in District 9700 with the Orphan Rescue Kits 2008-2009.  This sum of monies also includes two matching grants from the Rotary Foundation.

John has been awarded a Paul Harris Fellow by the Rotary Club of Hout Bay and the Rotary International Service Above Self Award from Rotary’s Past President DK Lee. John was also honoured by the CEO of RFFA Marion Bunch with the 2008 Jerome Schultz Hero Award. 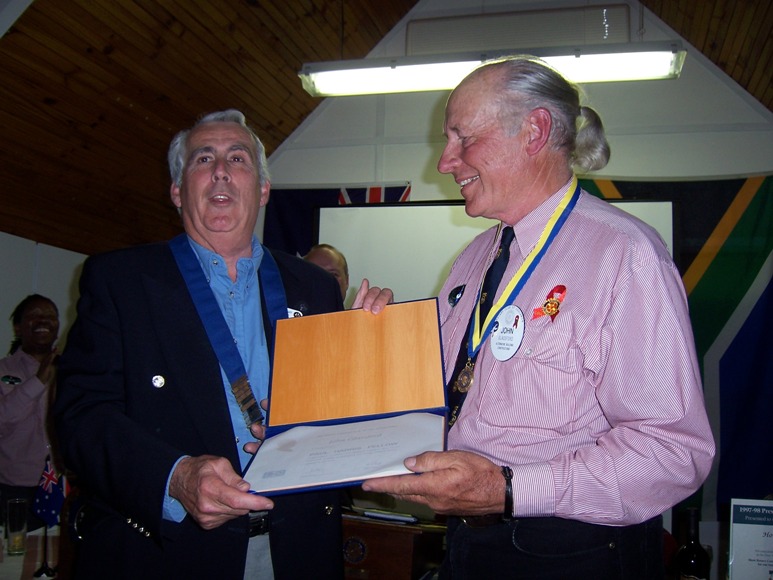 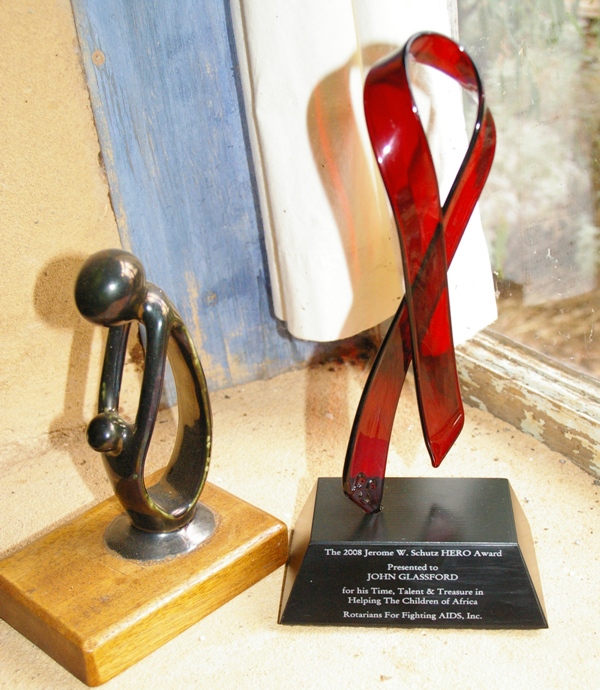 The last visit to Africa was the Mountains of the Moon climb.

This month I would like to introduce you to past District Governor Fred Loneragan from D9700.  PDG Fred was my DG in the year I was president of Coolamon Rotary.  Fred is a member of the Wagga Wagga Sunrise RC.  A former policeman in the New South Wales police force.

Fred and I climbed the Mountains of the Moon together with a team from Australia.  Fred is a multiple Paul Harris Fellow, a hard working Rotarian who has fallen in love with Africa and the people and animals there.

Fred was awarded the Jerome Schultz Hero award from the CEO of RFFA Marion Bunch for his passion and dedication to the AIDS Orphans of Africa. 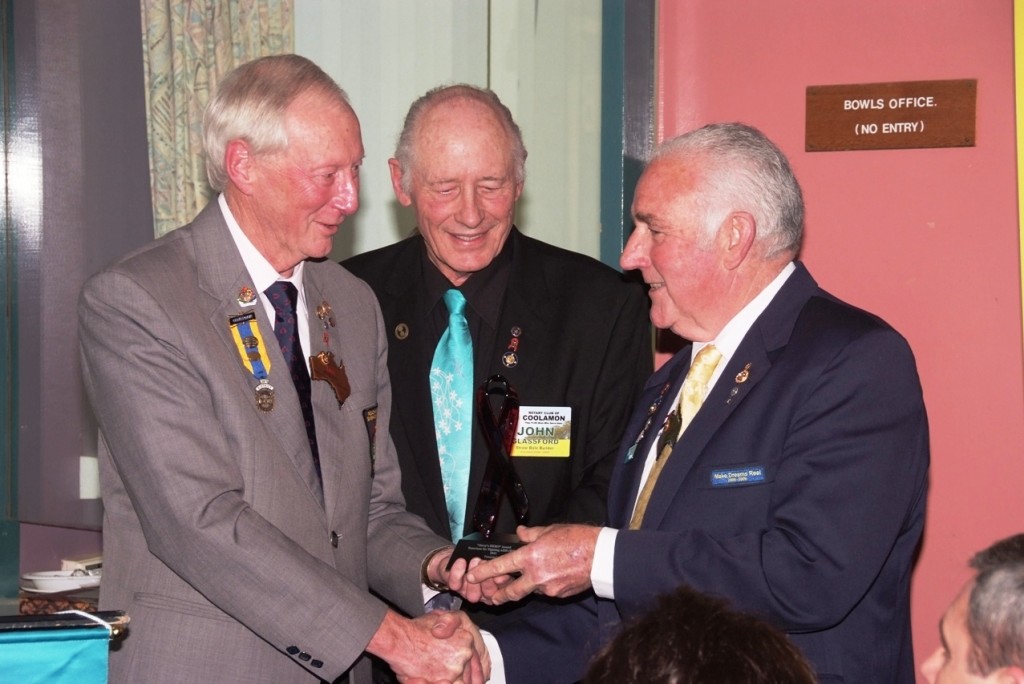 “The annual District 9700 Change Over was held at the Leeton Returned Soldiers Club in conjunction with the Leeton Rotary Club’s 71st Change Over Dinner.  Over 170 Rotarians and their partners were present at the function.  It was a long night and the best was left to almost last which was the presentation to PDG Fred Loneragan with the RFFA Jerry’s Hero Award.  DG Ian Simpson made the presentation and introduced John Glassford as a RFFA Board member and of course PDG Fred.

DG Ian read out a message from Marion Bunch which was warmly received by all present.  The award is a beautiful crystal red AIDS ribbon, made in Atlanta, delivered to Bangkok and then to Leeton in ONE piece.  Fred was very surprised and delighted to receive the award on behalf of the children of Africa.  The dinner then concluded with the change over from PDG Ian Simpson to incoming DG Greg Brown.” 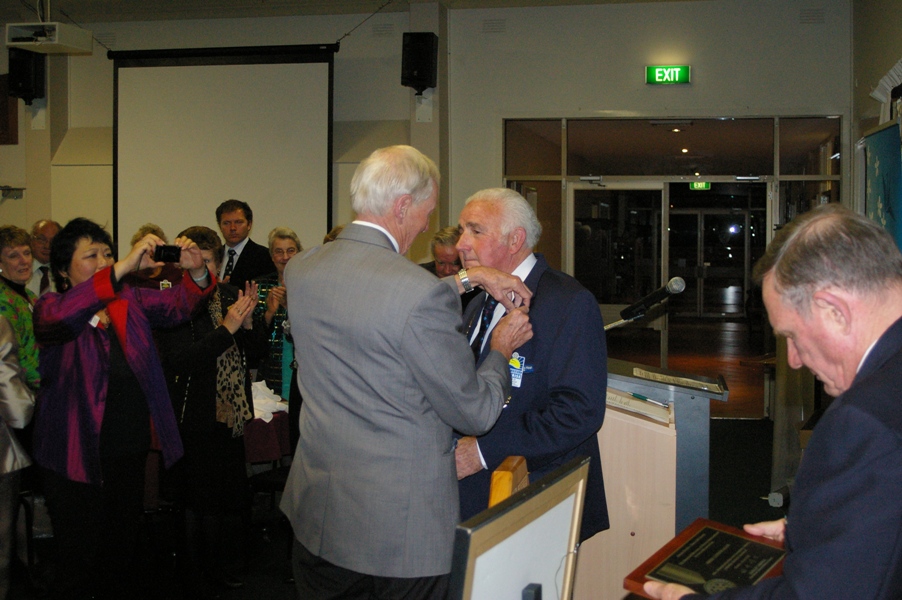 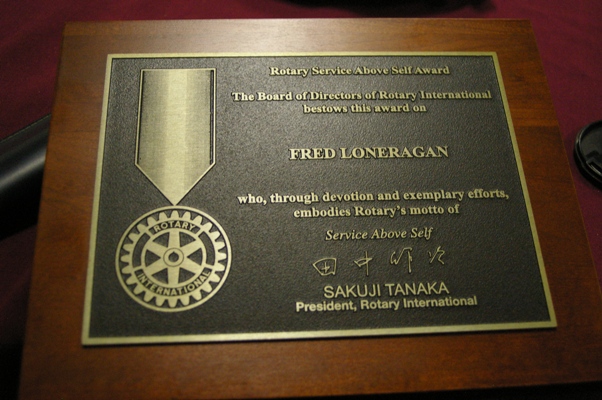 PDG Fred was awarded Rotary’s highest award the Service Above Self Award this year and for good reasons.  Fred is also Chair of Rotarians For Fighting AIDS Australia.  I would call Fred a great mate of mine and of Africa.